Just like in humans, cancer in dogs is a very serious condition which canseriously impact the life of both the dog and its owner. As with
humans, cancer in dogs is on the increase and today, excluding accidents, almost half of all dogs aged 10 or over are likely to die from
the disease. One of the most common cancer in dogs is the mastocytoma (or mast cell tumor), which is what our family dog Maxxamillion was
recently diagnosed with. What a shock this was to my husband and I because we had taken Maxxamillion to the vet two years earlier for a
fatty tumor that was growing around the top of his left front leg. A biopsy was done and we were informed that the tumor was comprised of
fatty matter and at that time the test showed no sign of cancer. The cause of mast cell tumors is unknown.

The statistics on cancer in dogs was a bit alarming to us, and in fact, the current rate of cancer is higher in dogs than it is in humans.Incidences of cancer in dogs are very difficult to accurately estimate. On average, the highest incidence of cancer occurs in dogs 6 to 10 years of age. Because dogs can't tell us where it hurts, medical treatment for dogs is very different from the medical approach for humans.

According to our veterinarian, Maxxamillion's cancer was spred by the tumor cell itself. Other studies indicate that one of the most
common cause of cancer in dogs is commercial dog food toxins, and preservatives in their diet. Cancer in dogs is always tough to handle because treatment can't be administered as aggressively to them as it is to humans.

One of the options that was recommended to us by our vet for treatment was radiation therapy. Although we live in a big metro city, the problem is that there are very few veterinary clinics that offer this radiation thereapy treatment. Radiation therapy, can also be very grueling on an older dog, and also very expensive. Moreover, it is not a suitable treatment for many cancers. The closest treatment center that we could find for Maxxamillion was over 40 miles away. Before radiation, our vet recommended that we
talk to an encologist about having a 3d ct scan done to determine if the cancer cells had spread beyond the tumor that was removed, but actually, Maxxamillion had two tumors removed, and each tumor weighed 3 pounds. The first tumor did appear in the x-ray and when the vet removed it, he found the second tumor that was hiding. The first tumor was benign and only the second tumor was cancerous. A 3-d ct scan entails putting an animal under anesthesia.

The 3-d ct scan would determine the extent of the cancer or if he was cancer free. Although our vet assured us that the cancer was contained within the tumor he had removed, and there was a possiblility that some cancer cells may have gone beyond the tumor. We were advised that it would be best to take Maxx for his 3-d ct scan five days after the surgery, at which time it was still very difficult for Maxx to move and walk, but we figured that if this was the best fight he had, it was better to go ahead with the radition. Unfortunately, it is an expensive procedure. The radiation therapist also informed us that because Maxx was overweight he would run the risk of complications because fat does not allow the anesthesia to metabolize as it does in thinner dogs. Maxx's 3-d ct scan was performed. After the procedure, which took approximately four hours, Maxx woke up from the anesthesia and was allowed to come home. Max was still groggy from the anesthesia 12 hours later, which we knew might happen because he was overweight.

Due to the fact that it scared us so much and that we would lose him to the anesthesia, we and the therapist came to the decision that it
would be best to monitor Maxx and hope for the best at his age. We didn't want to inflict any more suffering on our baby. Radiation would
have consisted of 25 daily visits with anesthesia being administered each time. If the tumor does come back there is a possiblty that he can have surgery again. For now he is 11 years old and doing much better. He lost a little bit of his step, but he still walks around, plays a lot, goes for short walks, and has fully recovered from his tumor operation.

Posted by Maxxamillion at 12:00 AM No comments: 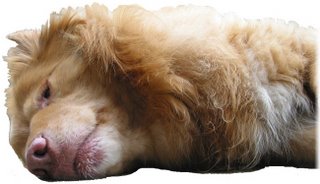 Hello all, Just want to let every one know Maxxamillion is doing well with his recovery. He is a little stiff around his hind legs from his arthritis. We still give him liquid glucosamine daily for his arthritis. He gets around very well and has very little trouble climbing stair. In the past his vet has recommended Rimadyl, but we just do not trust this medication for a dog of Maxxamillion's age and size. Plus we have had friends of ours have bad results from Rimadyl. The liquid glucosamine has been working very well for Maxxamillion for about three years now. Thanks for stopping by!
Posted by Maxxamillion at 10:35 PM No comments: